In 1992, the Union of Concerned Scientists and >1700 scientists wrote the “World Scientists’ Warning to Humanity”. They warned of environmental destruction and warned, “a great change in our stewardship of the Earth and the life on it is required, if vast human misery is to be avoided.”

Read the paper published in BioScience, spread the news. 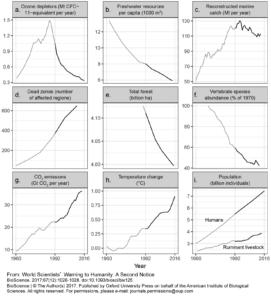 Caption for the image adapted and shortened from that published in the paper by Ripple et al. (2017.) in BioScience:

Panel (a) shows emissions of halogen source gases, which deplete stratospheric ozone, assuming a constant natural emission rate of 0.11 Mt CFC-11-equivalent per year. In panel (c), marine catch has been going down since the mid-1990s, but at the same time, fishing effort has been going up. Panel (f) illustrates vertebrate animal abundance between 1970 and 2012– vertebrates declined by 58 percent. Five-year means are shown in panel (h). In panel (i), are increasing abundance of humans and ruminant livestock (domestic cattle, sheep, goats, and buffaloes).